Exhibitor Magazine asked 2LK’s Creative Director to detail a half-dozen of the most successful stands from the 2017 Frankfurt Auto Show.

Digitisation is transforming the hardware-driven automotive sector into a software-focused industry. As consumers, our evolving digital lifestyle breeds constant demand for new and innovative services in every facet of our hyper-connected existence. The future of mobility consists of technology-enabled travel encompassing pre-trip, in-trip, and post-trip services which improve the user’s journey experience through diverse “digitisation.”

The automotive industry is under fire from new brands like Tesla Inc., carmakers are being pressured by government regulations, and the entire concept of ownership is now threatened by services like Uber. As such, it’s not just the vehicles themselves which are changing: the future of automotive manufacturing, sales and servicing is transitioning to an experience-based model, using a suite of digital tools and integrated technology to take the friction out of every consumer touchpoint.

As cars edge ever closer to thinking for themselves, auto shows are evolving to match. And as the products change, so do the stories – as well as the storytelling techniques. Brands are no longer bragging about speed, comfort and performance, but about intelligence, efficiency and simplicity. It’s no longer enough to place next-generation concept cars on turntables, light them with style, dress them with beautiful girls and surround them with high-end materials. Demonstrating software solutions and showcasing smart, intangible, future capabilities requires a lot more thought.

As hardware and software collides, the lines between products and services are blurring, and we’re experiencing a triangulation of market sectors which is very visible on the show floor. Events like the Consumer Electronics Show (CES) in Las Vegas and Mobile World Congress (MWC) in Barcelona are hosting more and more automotive brands as they strive for positioning alongside Silicon Valley tech companies. In return, shows like the Frankfurt Auto Show (aka Frankfurt IAA) are hosting brands such as Facebook Inc., Sony Corp., and Qualcomm Technologies Inc., all desperate to sell their connected dreams through the automotive industry.

This injection of alternate brands brings along a much-needed revolution in the auto show visitor experience. Brands are learning storytelling techniques from their new neighbours and, ultimately, there is unexpected and shareable content at every turn. As for exhibit-design trends, there must have been a strict memo at Frankfurt IAA this year demanding that all exhibitors use concrete-like materials and install trees at any possible opportunity. (I fear we may have Apple to thank for the latter.)

The big players are working hard to keep up with this changing industry, which is one reason why their stands were among the most successful at the show.

Below, in no particular order, are six that stood out.

Mercedes-Benz
Under the banner of “Future Mobility”, Mercedes-Benz expertly showcased “Future Making”, “Future Methods” and “Future Experiences”. The space was rich with personal touches that brought a sense of humanity to the stand: art commissions, display sculpture, living walls, swings and abundant complimentary catering. It was a multi-story city and a total brand experience. The full range of vehicles were on display alongside the considered quality of materiality you’d anticipate. A series of smart tech experiences (such as HoloLens autonomous driving walk throughs, smart city models, robotic displays, a 3-D printing factory and start-up incubators) all served to underline Mercedes long-term vision for the industry and the space itself felt unexpectedly friendly, warm and welcoming. 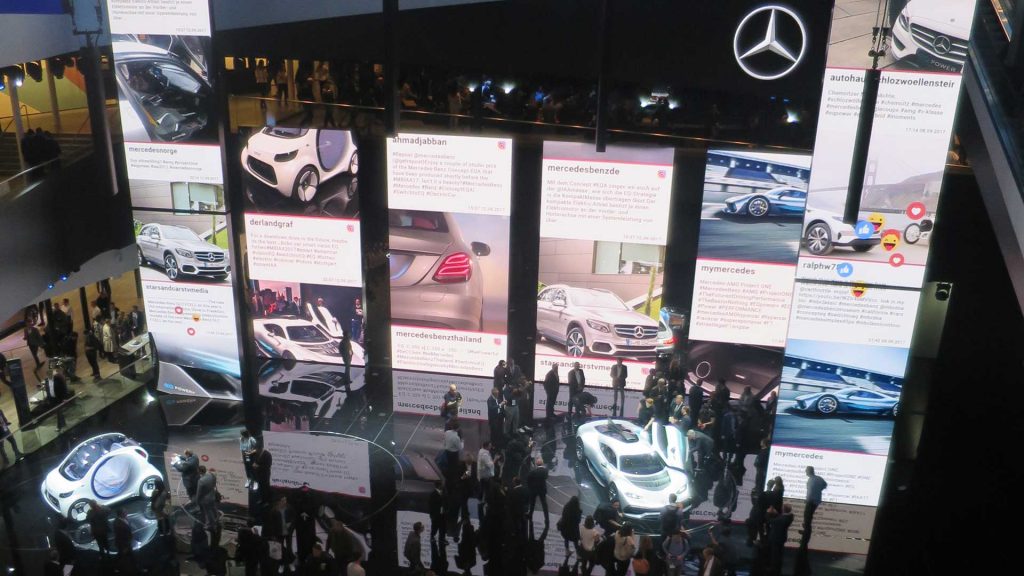 Volkswagen Group
Volkswagen Group’s stand was playful and confident. The company had clearly worked hard to blend digital experiences alongside the latest vehicles. Numerous video “capsules” created intimate moments that allowed visitors to forget the crowds and immerse themselves in a catalogue of VW’s future products/services. There were also some solid virtual-reality-connected car experiences, immersive eye-tracking demos, gesture tech games and entertaining (albeit it seemingly meaningless) football performances. VW topped it off with tons of friendly, relaxed staffers keen to talk – not to mention the free coffee. All in all, it was a great place to spend some show-floor time.

BMW AG
Even though BMW AG’s exhibit was the same basic structure the company has used at Frankfurt IAA for some time now (and clearly the budget is bottomless), you cannot fault the experience. The fit and finish is sublime, the layout intriguing, the vehicles beautifully presented, the lighting first class, and – although a little tame – the scale and simplicity of the architecture is compelling. The effect is more like a VIP lounge than an auto show stand in the sense that it feels like a privilege to be there. No booth at the show held my attention for longer. In fact, it’s possible that no booth has ever held my attention for longer. The highlight of the stand was the stage, once again featuring a physical race track wrapping around and through the auditorium, leading to an extravagantly visual stage set. A powerful soundscape, dynamic moving screens, faultless content and smart choreography were the cherries on top of this stand-design sundae. It was Cirque du Soleil meets German efficiency. 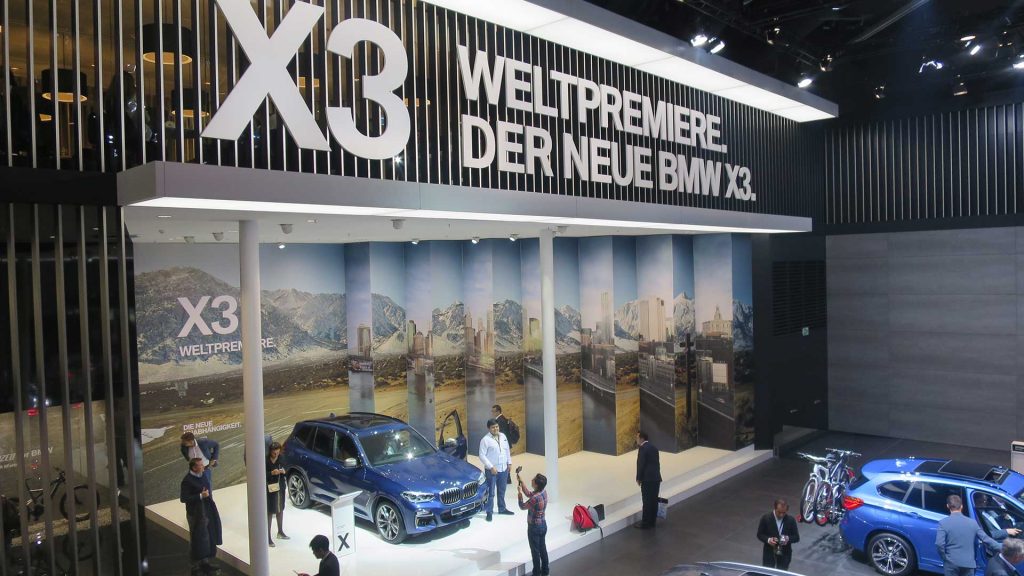 Facebook Inc.
It’s always nice to see the physical expressions of virtual brands/products like Facebook, as they blend their identities into the built environment. As lead sponsor of a new sub-event hosted in Hall 3.0 dubbed “New Mobility World,” Facebook was the anchor for all other tech brands in attendance. The booth was modest in scale but honest, considered, raw, simple and rather friendly. 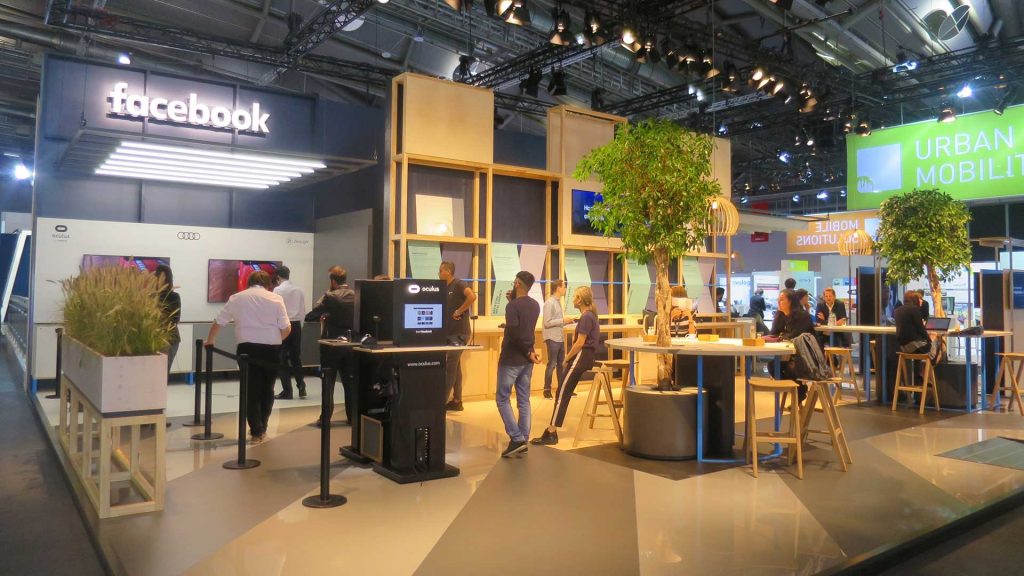 Thyssenkrupp AG
Nope, I had never heard of Thyssenkrupp AG before either, but the company’s booth was great. In fact, it was the clearest and best branded of all the stands at Frankfurt IAA. Its deep and contoured fascia was instructive, luring visitors into the central stage. Varying-height platforms created a sense of journey and differentiated a series of zones within the space, giving prominence and visibility to a range of demo experiences, one of which was without doubt the best virtual-reality experience at the show. It’s a rare success to see VR deployed in a way that immersed the user while also stimulating the spectator, but Thussenkrupp succeeded at accomplishing both.

Bentley Motors Ltd.
No tech. No gimmicks. Nothing smart or engaging. But Bentley Motors Ltd’s booth was an absolute obsession of detail, fit, finish and material application. Exquisite throughout, the stand offered a true five-star experience aimed squarely at those who can afford Bentley’s luxury autos – and shamelessly excluding those who can’t.

This article was first published in October 2017 in Exhibitor Magazine.